Men’s Health UK sat down with Adam Peaty before the Commonwealth Games. Before he suffered his first 100m breaststroke defeat since 2014. Before he’d been chastised on social media for not taking the Games seriously enough, and before he’d shown how much of a competitor he is by winning the 50m breaststroke.

This is what he said about his hopes, heading into the competition.

“I’ve got no expectation in terms of performance,” he said. “I’m just going to turn up and see what my body can do. I think that’s a great place to be in. I’m not going to put any expectation on time or performance. Obviously, I want to win. I turn up to every single competition, and I want to win. That’s what I tell myself every single day. That’s what makes me drive, so I’m not going to sit here and go, ‘oh, I want to get a medal’. Because that’s not me. I go to every single event to win. And I’ll just see where my body can take me.”

The sheer amount of work Peaty puts in guarantees that. Even before the Games, while Peaty’s foot was encased in a protective boot, he was putting himself through gruelling cardio sessions. Once the boot came off he was back to lifting like a powerlifter, with 125kg squats and over 500kg leg presses on his agenda.

Peaty enjoys the work, both in and out of the pool. Here, he reveals the five exercises he favors the most. Unsurprisingly, they’re perfect for forging powerful bodies and even more powerful minds. You can’t accuse Peaty of lacking either. 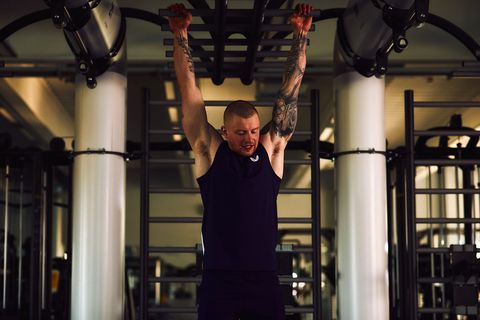 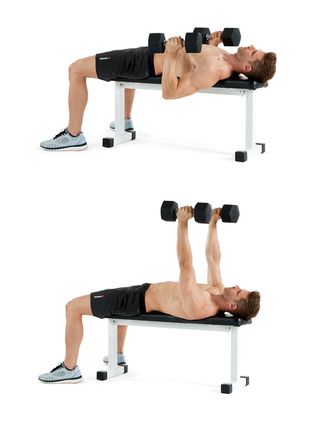 How to: Lie face up on a bench while holding two dumbbells at chest height. Press the weights up until your arms are fully extended. Then slowly lower back to the starting position. 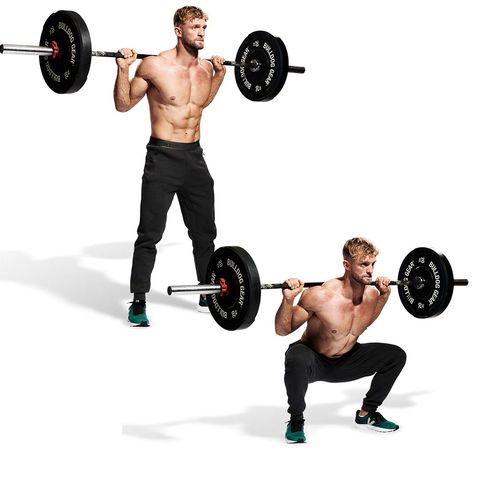 How to: With your feet just-beyond shoulder-width apart and a barbell across your upper back with an overhand grip, slowly squat down. Keep your head up, back straight and buns out. Lower yourself until your hips are aligned with your knees (a deeper squat will be more beneficial but get the strength and flexibility first). Drive your heels into the floor to push yourself explosively back up. Keep form until you’re stood up straight.

Peaty says: “You can clearly see when people miss leg day and back squat is one of those that everyone tries to avoid, but it’s so good for you in terms of the whole body chain and the strength down the spine.” 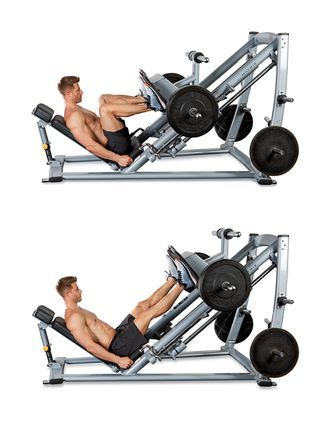 How to: In the leg press machine position your feet shoulder-width apart on the platform. Push into the platform until your legs are outstretched without locking your knees. Slowly lower, until your knees are at 90 degrees to the floor, then push back to the start position through your heels.

Peaty says: “I really enjoy the leg press because it’s quite easy to do, you get that stabilisation but you can also take the load up as high as you can. I think I’m at 500kg on there now, maybe a bit higher.” 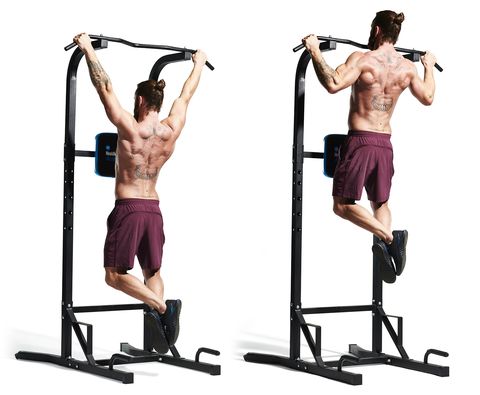 How to: Grab the handles of the pull-up bar with your palms facing away from you and your arms fully extended. Your hands should be around shoulder-width apart. Squeeze your shoulder blades together, exhale and drive your elbows towards your hips to bring your chin above the bar. Lower under control back to the start position.

Peaty says: “I would say pull ups, but only bodyweight because I can do a lot on bodyweight. It gets obviously very hard when you’re looking at 55 or 60kg. Someone needs to come up with a machine that just takes away the bulk of the plates because when you get to 3x20kg plates you’ve got no leg movement. I don’t enjoy that because it’s awkward, but I do like bodyweight, and it’s really good for your back muscles and the shoulders.” 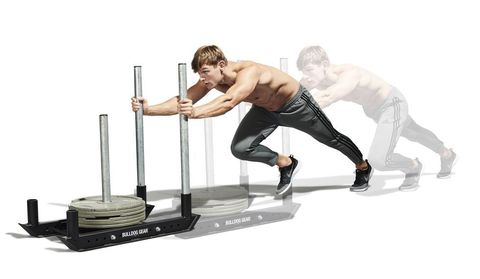 How to: With your torso almost parallel to the ground, grip the sled with your arms locked out. Drive the sled by marching forward as fast as you can, bringing one knee up to your chest as your other leg extends behind you.

Peaty says: “I really like sled runs because it helps that snap on the hamstring but you can also use it as a heavy-weight, anaerobic training thing or you can use it as a lightweight thing where you can hit that aerobic block. So I think it’s very very useful for power sports.”

Adam Peaty is an ambassador of British sportswear brand Castore, wearing Castore’s SS22 collection on his journey to Commonwealth Games Gold. Available to purchase at castore.com

Daniel Davies is a staff writer at Men’s Health UK who has been reporting on sports science, fitness and culture for various publications for the past five years. In his time at MH, Daniel has logged training time with NFL athletes, Olympic gymnasts, professional boxers and the British Army, while he also recently completed his first marathon, finishing with a respectable time of 3: 50: 55. You can find him on IG and Twitter: @iamdanieldavies