HBO’s Game of Thrones prequel House of the Dragon takes viewers back in time nearly 200 years to a period in history when House Targaryen ruled over the Seven Kingdoms, and has proceeded to tell the story of how the white-wigged family’s prosperous reign becomes endangered by an increasingly messy dispute over the line of succession. And it’s not just the various Targaryen heirs who have their eyes on the prize: so do the Velaryons.

We know that aside from the Targaryens, House Velaryon is the only family in Westeros to also hail from Old Valyria: numerous mentions have been made of their pure Valyrian blood, which makes them a strong match for marriage and interbreeding. This is presumably the reason why Viserys’ cousin, Princess Rhaenys, married Corlys Velaryon in the first place, and in the second episode of House of the Dragon, “The Rogue Prince,” they attempt to set up their young daughter Laena with the king, in the hopes of securing influence on the throne. The only flaw in their plan? Laena is 12 years old, and the king doesn’t much fancy the idea of a child bride.

However, we know that House of the Dragon is set to take place over a period of many years, with several characters to be aged up and portrayed by older actors in future episodes. This has already happened in the case of Laenor Velaryon, Corlys and Rhaenys’ son, who showed up as a boy in the first two episodes, then appeared in a more mature capacity in episode three, “Second of His Name.”

Who is Laenor Velaryon?

Portrayed in episode three onwards by Theo Nate, Laenor Velaryon is the heir to House Velaryon, and also shown to be a skilled warrior. This episode also confirmed that the Targaryens aren’t the only dragon riders in this universe: Laenor enters Daemon’s battle against the Crab Feeder atop his own dragon, Seasmoke and lays waste to their enemies with a familiar cry of “dracarys.” (It can be inferred that their Valyrian heritage affords the Velaryons a similar connection to these mystical beasts as the Targaryens.) 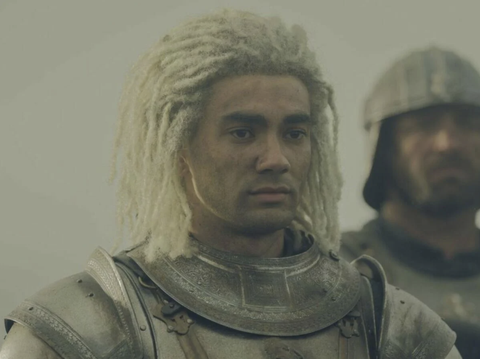 Laenor’s role in House of the Dragon is about to become a lot more prominent—and more complicated. In episode one, we saw that his mother Rhaenys was almost named heir to the throne by King Jaeherys, meaning that he could stake a claim of his own. In Fire & Blood, George R.R. Martin’s fictional history on which the series is based, it was actually a young Laenor who was considered viable as heir, not his mother. That tome also reveals Laenor’s significance to the show.

In the history books of Westeros, Laenor Velaryon is not just the first cousin of Rhaenyra: he is also her first husband, and they have three children together—Jacaerys, Lucerys, and Joffrey—although rumors abound that they were actually fathered by Rhaenyra’s lover. Courtly gossip also implies that he prefers the company of handsome young squires… although it remains to be seen whether this will be included in the show.

Philip Ellis is a freelance writer and journalist from the United Kingdom covering pop culture, relationships and LGBTQ+ issues. His work has appeared in GQ, Teen Vogue, Man Repeller and MTV.