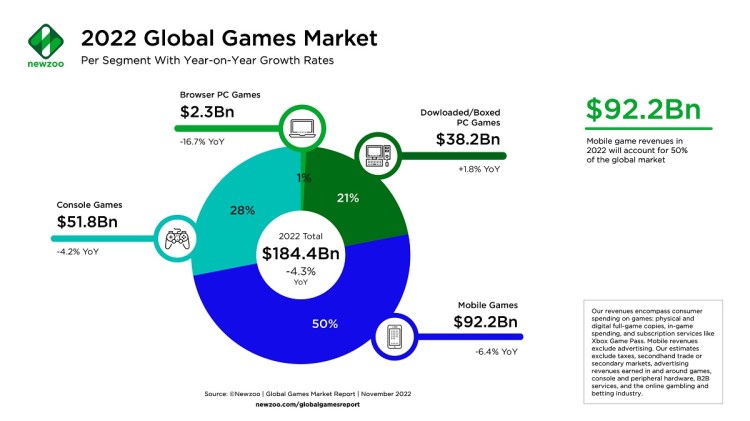 For the first time in Newzoo’s history of covering the global games market, the market researcher has revised its forecast downward to predict games will decline 4.3% in 2022 to $184.4 billion.

That isn’t necessarily a reason for the industry to panic, as 2022 is a corrective year after two exceptional boom years, and the overall long-term outlook for games remains positive, Newzoo said.

The downward revision is largely based on a slower-than-expected year for console games. I guess all those delayed games and console shortages have finally come home to roost. Newzoo has been covering the game market since 2012 and the industry has had positive growth every year since then.

“We knew that this was going to happen because we had our earlier forecast from July, but then the data that we had coming in each quarter influenced it,” said Tom Wijman, lead analyst for games at Newzoo, in an interview with GamesBeat. “There were still positive signs in Q1, but as we saw Q2 and Q3 come in, we saw what was happening. It was not a shock.”

The severity of the economic downturn in the world can affect gaming revenues, Wijman said. He noted that mobile games are likely to be impacted more by that, as casual gamers may be more sensitive to economic effects such as lower income and those players may choose not to spend more in games.

“It hits mobile spending harder than it does PC and console,” said Wijman.

Wijman said that Newzoo tracks actual results coming in from the top 150 public game companies around the world and then it takes that into account in judging how accurate its forecast is. It also makes estimate based on data from private companies and sources such as Steam.

“Even though this year is not a great year for gaming, we also want to say it’s important to emphasize that it doesn’t mean that for the coming years we’re forecasting a decline as well,” Wijman said. “The fact the installed base is not high yet can mean that those sales will happen later and maybe more good games will be coming out next year.”

“It’s a compounding effect of not having the installed base for consoles now that you would expect,” Wijman said. “It’s been two years now since the consoles launched. In my area, it’s possible to buy a PlayStation 5, which it hasn’t been for the past two years. But still, you would have expected by now that it would have been bigger.”

On top of that, he said we don’t have enough new games to buy.

“If there is no new content coming, then the impact is bigger. There aren’t that many new games to buy, and we saw it hurting services like Xbox Game Pass,” Wijman said.

Meanwhile, Newzoo said that 2022’s VR games market will generate revenues of $1.82 billion, a 26.4% year-on-year increase. This number does not include VR hardware.

The resilience of PC gaming

The forecast takes into account an analysis of the financial results of more than 150 publicly listed game companies (for the first six months of the calendar year 2022). That prompted the revision.

Browser PC games are declining, even though the year 2020 saw a brief resurgence of these games. The
segment will decline another 16.7% year on year to $2.3 billion, as more people migrate to mobile
games and those remaining spend less on average.

However, the downloaded and boxed PC segment will grow 1.8% year-on-year growth, more than offsetting the shrinkage in browser games.

PC gaming’s revenues are not as hit-driven as console gaming; a year light on releases such as 2022
affects PC gaming revenues less, as the top-grossing games typically have been around for multiple
years (if not longer than a decade).

Similarly, PC gaming is still a place where independent publishers can flourish, Newzoo said. Unlike the local mobile games segment, PC game revenues are still growing in China and Japan.

Newzoo is forecasting the mobile games market will generate $92.2 billion in 2022, down 6.4% year on year. The outlook for the mobile games market changed significantly compared to the previous forecast. While Newzoo anticipated that the removal of IDFA (Apple’s focus on privacy over targeted advertising) and pressure on people’s disposable income would dampen spending on mobile games, the first quarter of 2022 was still relatively strong.

However, spending in the second quarter was significantly lower than last year’s, and signs show that it did not recover in the third quarter. The second half of 2021 was a particularly strong period for the mobile games market; Newzoo does not foresee the market being able to repeat these results, let alone show growth. This is something that the entire mobile game industry got wrong, in my opinion.

Wijman said Newzoo knew the IDFA impact was coming but the severity of it changed, as mobile game companies said at first they would not likely be affected. In the first quarter, results were still pretty good for mobile game companies. But that changed over the rest of the year. That may have been foreseeable, at least for the companies in the space, Wijman said.

Mobile’s low barrier to entry (compared to PC and console gaming) also implies a lower barrier to exit.
Two main factors are contributing to mobile players’ behavior this year. First, as other forms of
entertainment and leisure spending became available once more, competing for players’ time and
budget.

However, based on Newzoo’s research this year, the company found it will hit mobile more than PC and console. The more important the role of gaming in people’s lives, the less likely people will lower their spending on games in face of economic uncertainty or with alternative options for entertainment.

Newzoo is forecasting the console games market will generate $51.8 billion in 2022, a decline of 4.2% year on year. The console segment is having a slow year as the release schedule throughout 2022 remains light. More than other segments, console is a hit-driven market, and a lack of triple-A releases hurts the market.

While some blockbusters were recently launched (such as Call of Duty Modern Warfare II and God of War: Ragnarok), Newzoo does not expect that these hits alone will offset the decline of the first half of the year.

During the year, the Chinese government continued cracking down on gaming in China, limiting new game releases and young people’s gaming time (out of fear kids won’t study and will become addicted). Despite this, the Chinese games market will still be the largest in the world in 2022, generating $45.8 billion. PC games were stable, but mobile games declined a lot in China, thanks in part to the regulatory situation in the country and restrictions on new game launches, Wijman said.

This is slightly more than the U.S.’s $45.0 billion, the second-largest market. Together, these two markets represent 49% of global spending on games.

Notably, revenues of breakout mobile hits of the past years, such as PUBG Mobile and Umamusume:
Pretty Derby, are declining rapidly. And no new titles have been as successful.

The corrective factor of this post-lockdown spending is especially notable in the three major Asian markets: China, Japan, and South Korea. Newzoo now forecasts a decline in all three markets, and, largely because of this, the Asia-Pacific region is forecast to decline most out of all major regions.

Wijman said some revenue was lost because of the war in Ukraine and disruptions in the Ukraine and Russian markets. But the effect was unclear. Still, Wijman said if an official estimate on Eastern Europe was made, that would have declined.

However, the downturn in the mobile market affects all regions; Newzoo now also forecast mobile gaming revenue to decline in Western markets.

Asia-Pacific will remain the biggest region by revenues by a massive margin, despite the performance of
its biggest markets. It will generate $87.9 billion in 2022, a year-on-year decline of -5.6% and represent
48% of the global market. Revenues will also decline in North America (-5.1%) and Europe (-3.5%) year
on year. Console is a massive segment in both markets, which means a slow year for console is a slow
year in these two regions.

Newzoo still forecasts the market to grow in the emerging gaming regions of Latin America and the Middle East and Africa, driven by new players entering the (mobile) gaming ecosystem and better access to payment methods. However, average spending in these regions is still low compared to other big regions. So growth in these regions does not offset the decline in mature gaming markets.

Newzoo doesn’t want us all to get depressed. The lockdown years may have pushed the games market to unsustainable levels of revenue, especially in the current economic climate, but the coming years look promising, particularly for console gaming. Newzoo is now forecasting the games market will grow from $179.1 billion in 2020 to $211.2 billion by 2025, growing at a 3.4% CAGR.

Console gaming will grow rapidly in the coming years, as the next two years will bring loads of new content for a rapidly growing user base of PS5 and Xbox Series consoles. Furthermore, we expect a new
Nintendo device somewhere around 2024-2025, as the Nintendo Switch will then have launched eight
years ago.

Cloud gaming revenues are factored into the forecast. But Wijman said that we see a lot of economic activity around games that isn’t counted in these numbers. As examples, esports, VR hardware sales, streaming revenues for creators, blockchain games and more, Wijman said. Next year, he expects good growth for console games and console hardware. (Sales of console hardware and PC gaming hardware also not included in the forecast numbers).

“We don’t look at blockchain gaming as part of this games market yet,” Wijman said.

He acknowledged this was a $5.8 billion market in 2021, but he noted that the sales were likely dramatically lower in 2022 as Axie Infinity and the crypto market declined a lot. In that respect, blockchain games on their own couldn’t rescue the 2022 forecast.

“Arguably some of the activity around metaverse is being fueled by gaming roles, but it’s not well known as to direct spending on gaming,” Wijman said.

With esports, it’s more like a semantic discussion. It’s clearly not game revenue if an esports fan buys a T-shirt for a team at a tournament. But if it causes a fan to spend money in League of Legends, then that is revenue that can be counted. Nevertheless, such numbers are hard to come by and are not part of the forecast.

Wijman noted that current growth will “backload” the revenues for 2023 and beyond in contrast to how the pandemic boost “front-loaded” revenues in 2020 and 2021. If we sell more consoles and get a lot of good console games in 2023, that growth will come later. The growth in 2023 probably won’t be as big as the growth in 2021, in percentage terms (7% in 2021), but it will be positive, Wijman said.

While this year shows that price-sensitive players spend less during tougher economic times, engagement remains high across segments. The number of global players is still growing across the globe. Gaming proved resilient during turbulent economic times in the past; today, free-to-play monetization and subscription services mean that playing games is more democratized than ever before. Gaming is now embedded in consumers’ lives, and that will not change, Newzoo said.

“We are still optimistic about the future,” Wijman said.

GamesBeat’s creed when covering the game industry is “where passion meets business.” What does this mean? We want to tell you how the news matters to you — not just as a decision-maker at a game studio, but also as a fan of games. Whether you read our articles, listen to our podcasts, or watch our videos, GamesBeat will help you learn about the industry and enjoy engaging with it. Discover our Briefings.