It’s no secret that vinyl has seen a resurgence in popularity over the past several years, so much so that the once-dead industry has been revived (to a degree) and new vinyl records are being produced on the regular. Oftentimes these items are collectibles or novelty products, but there’s also a growing collection of singles and albums, as evidenced by UV, a website that tracks new and upcoming vinyl releases. That, of course, has also rejuvenated the market for the turntables needed to play these records, though the modern versions have little in common with their retro counterparts.

If you’re a diehard fan of both vinyl and Sonos, Victrola has a new model right up your alley. The Victrola Stream Carbon has been unveiled as part of the company’s new Victrola Stream product line; its key boasting point is direct integration with Sonos’ own audio products, meaning those who have a Sonos speaker setup at home can slot this turntable in with their existing hardware, no additional dongles or gadgets necessary. The new product comes with its own companion app for setting up the turntable, but Victrola says users can control it using the Sonos app — the same one that you may already use to control your home’s sound system.

The Victrola Stream Carbon is the flagship model in the company’s new lineup; it boasts a physical (and illuminated) knob for manually controlling the turntable during times when you don’t feel like pulling out your smartphone. As you’d expect, the music played from the record on one of these turntables can be sent to one or more Sonos speakers located on the same network, meaning you can enjoy your favorite classic jazz records even when you’re in a different room. 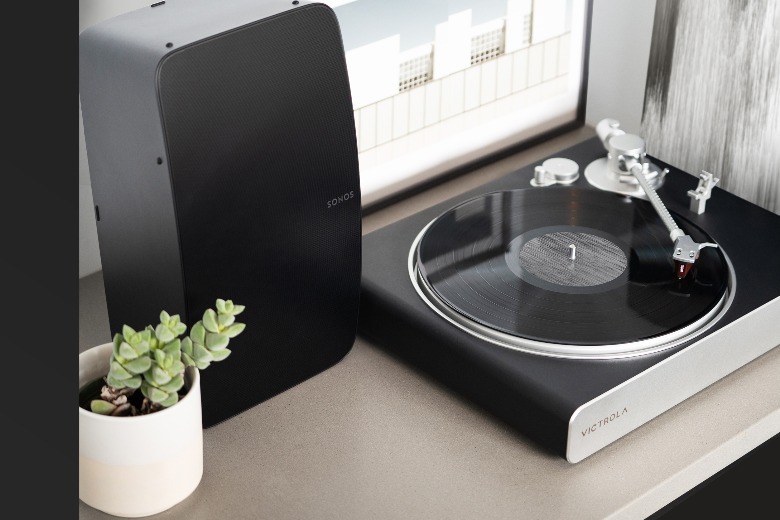 The turntable has an official Works with Sonos certification, and it sports what is described as a high-end finish alongside its sleek design. Among other things, Victrola explains that it used a veneer plinth that facilitates a low resonance and that, when paired with the removable headshell and carbon fiber tonearm, should help ensure a quality audio experience. The company also revealed that this turntable sports an Ortofon Red 2M magnetic cartridge, which is said to offer “optimized” sound reproduction for what will hopefully be a faithful digital transmission of the record to whichever Sonos speaker you feel like using at any given time.

The Victrola Stream Carbon model is first up for pre-order in the U.S., but the company plans to launch it in other markets at some point in the future. Beyond that, the rest of the models in the Victrola Stream line will be announced early next year, but no hard date was given. Hopefully “early” means, in this case, at CES 2023, but we’ll have to wait and see.